Is Britcoin, Not Bitcoin, The Future?

At a FinTech conference in April, Chancellor Rishi Sunak announced that the Bank of England was “exploring” the case for a new digital currency, dubbed Britcoin.

This is the latest iteration in a saga about politics and power, encompassing jurisdictions from Brussels to the Bahamas. Yet whilst many have heard of Bitcoin, central bank digital currencies, called “govcoins” by the Economist, have slipped under the radar.

The Power of CBDCs

As a central bank digital currency, Britcoin can be thought of as a digitised version of Sterling banknotes, accessed through an app-based interface. Instead of holding deposits with retail banks, individuals would instead have a direct relationship with the central bank.

Payments, backed up by the solidity of the state, would sidestep the complex world of retail payment interfaces, potentially making business cheaper by dispensing with expensive transaction fees – by up to 3% of UK GDP to be exact.

The roll-out of CBDCs would also democratise banking. Around 1.7 billion people around the world are classed as underbanked, defined here as without access to an account at a financial institution or money provider, for lack of digital literacy or requisite documents.

CBDCs do not require individuals to have a bank account to hold such currencies. These currencies thus hold an abundant amount of promise for the developing world, in which underbanked populations are concentrated.

No more fallible retail banks, like Monzo or RBS. Forget the fees and bureaucracy imposed by the old lords of finance. You will finally be able to buy a beer with the full sovereign force of the Bank of England behind you. 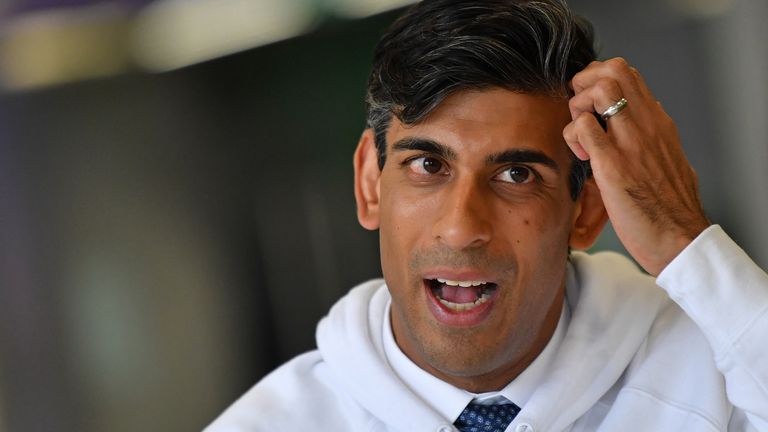 Chancellor Rishi Sunak announced that BofE is “exploring” the case for a CBDC, Image via Sky.

Yet whilst many extol the virtues of this development for UK business and ‘underbanked’ communities alike, some are decidedly less pleased about its more Orwellian implications.

Cryptocurrencies, such as Bitcoin and Ethereum, have a distinctly anarchic flavour. Created to wrestle control of money away from institutions after 2008, they diffuse power through a decentralised network of computers and autonomous individuals, embodied in the mining process.

CBDCs do the opposite – they vest the state with Leviathan levels of power over why, when and how people spend their money. They create the problem which Bitcoin intended to solve.

If Britcoin were to become a dominant legal tender, the potential for misuse would be huge.

The programmable nature of CBDCs graces central bankers with the ability to incentivise or prohibit certain activities, expiry dates on funds for example. States could have direct access to your wallet for tax purposes.

The central bank would essentially become a vast transactional ledger – a record of all data surrounding every transaction that you have ever made. Whilst the state can theoretically access all your financial data anyway, CBDCs will formalise and streamline this. And Big Brother will choose to look.

As the total market cap of cryptocurrencies has grown, central bankers have come under increasing pressure to retain control over the flow of money.

The cryptocurrency market was worth $2.4 trillion at the beginning of May. If too much liquidity is transferred out of the banking system and into private, digital realms, then the central bank loses its raison d’être – its ability to manage boom and bust cycles through monetary policy.

This existential threat to the state’s ability to manage markets has prompted more than 50 central banks – including the US and China – to explore CBDCs like Britcoin.

Yet there is also an element of structural risk to introducing CBDCs. To reduce the risk of disintermediation, whereby commercial banks are starved of the deposits they use to find lending, there would have to be some form of mechanism limiting the size of deposits that individuals could hold with the central bank.

Our current financial architecture must innovate if it is to meet the demands of introducing Britcoin.

The Future of Finance

It is the latest front to open in the struggle between two competing philosophies of finance: crypto versus fiat, decentralisation vs centralisation. As global powerhouses like the ECB look to launch the e-Euro by 2025 and crypto markets grapple with the prospect of further regulation, the future of finance is being forged.

Is Britcoin, not Bitcoin, the future? And with that, is Big Brother living at the bank?

Header Image: The UK is considering creating a Britcoin, Image via TheNextWeb (TNW).