AR Glasses: Can You See The Potential?

This has injected new dynamism into the race to make AR available to all. And it promises to revolutionise how you use tech to maximise your business.

Weighing around 134 grams, Spectacles are much sleeker compared to rival Microsoft’s Hololens headset. The release of Spectacles is a landmark event – it represents the first iteration of a (somewhat) aesthetically acceptable piece of AR technology. “Every other product out there is a helmet”, stated Snapchat CEO Evan Spiegel in an interview with the Financial Times.

However, Snapchat spectacles are not new. A previous iteration, released in 2016, was met with a cool reception – only 0.08% of Snap users bought the Spectacles. Yet whilst earlier models could only record and send video, the 4th-generation Spectacles are different.

Previous iterations of Snapchat’s Spectacles product could only capture and send video, Images from Snapchat via Wareable.

Waveguide optical see-through displays, created by UK startup WaveOptics, allows users to overlay Snapchat’s iconic ‘Lenses’ onto their vision. These are simple AR filters, created by a vibrant community of digital developers, that display an object or distort a particular image.

Lenses can take any form, limited only by the creativity of those who produce them. From dinosaurs wreaking havoc to spacecraft flying overhead, or an apocalyptic vision of Godzilla. AR vests digital developers with the power to manipulate and shape a given reality.

AR is often regarded as a gimmick – a fanciful artefact, existing solely in the realm of sci-fi nerds and dreamers. Yet it’s much more real than you would think.

And with big tech giants like Apple and Facebook attempting to bring this to mass fruition, the future is just around the corner.

Capital is also pouring in. Snapchat acquired WaveOptics, the UK startup behind its AR technology, for a cool $500 million.

This is matched only by Apple’s $410 million investment into a Texas-based optical technology manufacturer which will supply the components for the Apple Glass product. Facebook is also looking to launch its own pair of “smart glasses’ in partnership with Ray-Ban by the end of the year.

The high priests of Silicon Valley tech are betting big on AR.

Blockage on the road to reality?

Yet the creation of a mass-adoptable, affordable AR device has been inhibited by a number of factors, most notably by design. Bundling the components necessary for AR display into a discrete, aesthetically pleasing device has proven abundantly complex.

And the aesthetic appeal is just as important as technological complexity. Who wants to use an AR device every day if it is the size of a fighter pilot helmet and has the heft of a concrete brick?

Battery life is also a problem. Spectacles only have enough juice for 30 minutes of run time – an iPhone would be useless if you could only use it for half an hour at a time.

If AR devices are to become part of our everyday tech repertoire, then innovation needs to meet inhibition.

Even Mark Zuckerberg believes this to be a herculean task, referring to mainstream acceptance of AR devices as “one of the hardest technical challenges of the decade”. A picture of the latest iteration of Snapchat’s Spectacles product, via Snapchat, VRScout.

But the payoff for doing so is huge. And so are the opportunities that it represents for your business.

The development of AR tech holds a great deal of promise for a variety of sectors, notably engineering and manufacturing.

Microsoft introduced their Hololens mixed-reality headset as a means of helping businesses work more efficiently, explicitly building the device for work and not play. It’s envisaged as a tool for those who craft with their hands and cannot readily integrate tech into their workflow, auto and aero engineers for example.

Think of virtual blueprints beamed onto an engine, or a surgeon looking at digitised CT scans to accurately understand a patient’s exact blood vessel anatomy. Despite its intangible form, AR is will have a very real impact on how we work. 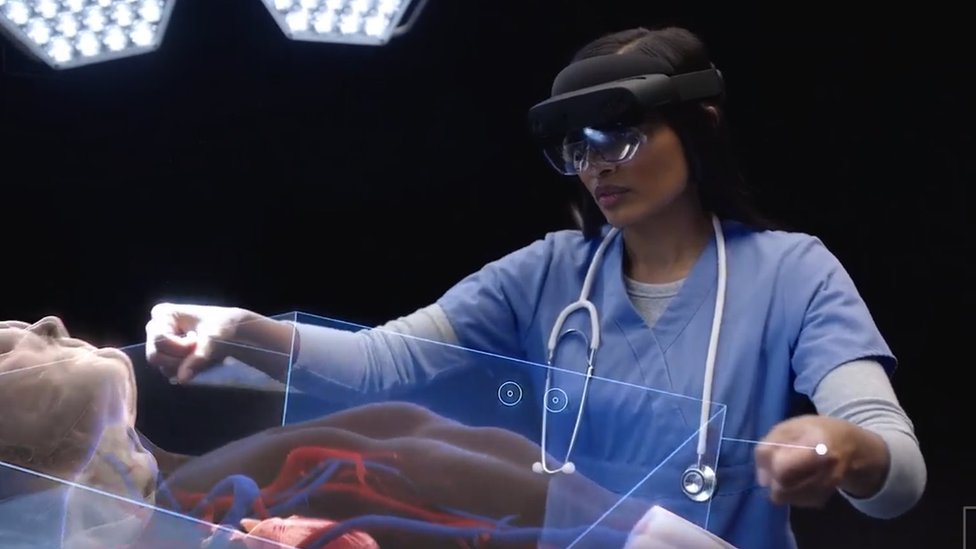 Microsoft’s HoloLens 2 is explicitly designed to be integrated into technical workflows, Image from Microsoft.

But it is e-commerce that is already beginning to feel the impact of AR.

With integrated support for clothing visualisation, Snapchat users can already virtually try-on garments, watches and glasses to visualise their fit through Lenses.

But it doesn’t stop there. Soon small businesses will be able to add AR versions of their own online catalogues, potentially giving smaller enterprises access to a market of over 265 million daily users.

Consumers will be able to experiment with all of their favourite clothing brands without ever having to set foot on a shop floor, giving brands privileged access to a huge potential market. AR will allow ordinary consumers to beam the world of high fashion into their bedroom.

This intersection between AR and e-commerce has already been exploited to great effect. A 2018 collaboration between Snapchat and Nike to pre-release the new Air Jordan’s using an AR Lens led to the shoes being sold out in just 23 minutes.

More recently, Ben & Jerry’s partnered with Snapchat’s AR Lenses to create the first ice cream “pack scan”. Users are invited to scan the new Cookie Dough Peace Pop, opening an AR lens that will convey them to a summer festival vista, complete with sunshine and live music. In an era when mass experiences are prohibited, AR is bridging gaps and overcoming real-life inhibition.

Will it Become a Reality?

Technology is forging a new consumer reality, innovatively connecting brands with Gen Z audiences. With the global e-commerce market expected to top $6 trillion by 2024, it seems like a match made in heaven.

Yet AR technology is still in its infancy, and some tech chiefs estimate that devices suitable for ordinary consumers won’t be available for another decade. Even Snapchat’s Spectacles have exclusivity about them, having been released to a limited number of “global creators” in the AR developer community.

AR is our destiny. But it’s yet to become our reality.